The times of San Diego is reporting that the Foreign Minister from Mexico has vowed that Mexico will fix the Tijuana Sewage situation. Nothing was indicated as to when or about any of the hazardous chemical dumping that has been taking place or the problem with trash and other polution. However, it is at least shows some progress in getting Mexico to respond to the problem taking place with the sewage problem besetting the Tijuana Valley and the Pacific Ocean in and Imperial Beach. Here is part of the article and a link to the full article: 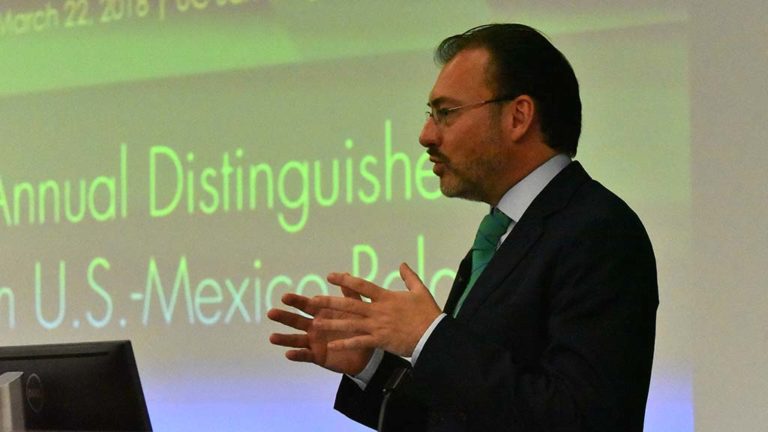 Luis Videgaray, Mexico’s foreign minister, told UCSD audience that he’s said “a thousand times publicly and a million times privately” that Mexico would not pay for Trump’s border wall. He also offered no “Plan B” candidate for president in July elections if the current PRI hopeful — José Antonio Meade — stays third in the polls. “That’s a great question, and I’m not going to answer,” he said. Photo by Ken Stone 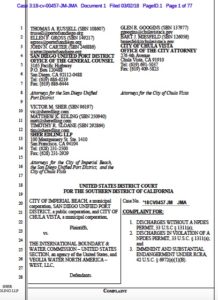 “For sure, it’s [on] my radar,” Videgaray told 250 at UCSD in response to a question from San Diego Union-Tribune reporter Sandra Dibble about “contamination of our shared Tijuana River watershed.”

“Before coming here, I spoke to the minister of finance and he assured me the funds are there… So the Mexican side should bear some responsibility. We have the funds allocated,” said the 49-year-old economist, returning to the La Jolla campus for the first time in 25 years.

Without giving details, he promised sewage issues “should be corrected in the next few months.”

Imperial Beach Mayor Serge Dedina, whose city is suing for improvements on the American side of the border, said he heard Videgaray make the same pledge to San Diego City Councilwoman Georgette Gomez and county Supervisor Greg Cox on Friday. 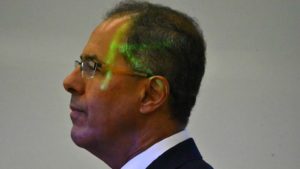 He said Videgaray made it clear that the binational chamber of commerce would make “another major announcement” in April.

“I’m going to be cautiously optimistic, but wait until the actual improvements are made,” Dedina said.

On the same day that President Trump signed an omnibus spending bill that includes $10 million for the EPA to address border problems, Dedina noted that Mexico has to match certain spending on sewage repairs.

“So we’re in a better place than we were in yesterday, that’s for sure,” Dedina said in a phone interview. 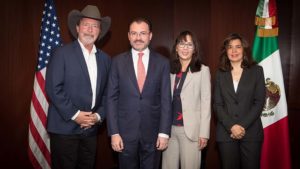 “And then they need to move on,” he said, to upgrading the Mexican pump station at Punta Banderas. “To me that sounds like a major priority right now.”

A third major task is for Mexico to stop dumping sewage — treated and untreated — into the Tijuana River, which has to be pumped out again, he said.

Videgaray told the inaugural Distinguished Lecture on U.S.-Mexico Relations at UCSD: “What Mexico should be doing is rebuild the infrastructure that is broken [and] what’s creating this problem.”

A week ago, Democratic Reps. Juan Vargas, Scott Peters and Susan Davis of San Diego were signatories to a letter urging House appropriators to include $10 million for the U.S.-Mexico Border Water Infrastructure Program.

The EPA program, they wrote, is “the only federal program that can fund projects on both sides of the border.”

The money — and Mexico’s fixes — can’t come too soon for Dedina of Imperial Beach, a longtime surfer who was sickened by coastal toxins himself.

“It’s the highest-level [Mexican] official that’s ever commented on this issue,” he said of Videgaray. “So that’s great. It’s Mexico’s responsibility for fixing the problem.” 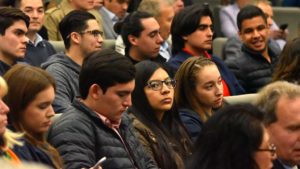 University students from Baja California attended the Mexican foreign minister’s first visit to UCSD since his MIT student days 25 years ago. Photo by Ken Stone
Dedina said Tijuana developers are being charged to hook into a sewer system that doesn’t work.

“Imperial Beach and Coronado and their own coastline pay the costs for it,” he said.

“The reality is that developers and agencies in Tijuana and Baja California have made millions and millions of dollars because they get to dump raw sewage on us.”

In the federal suit filed March 2 by the San Diego Unified Port District and two South Bay cities, the International Border Water Commission and co-defendant Veolia Water North America have yet to respond, according to court records.

“But in a reaction to the notice of intent to sue, they said they don’t have any responsibility to fix the problem,” Dedina said.

Mexican pledges to repair sewage issues do not make the federal lawsuit moot, however.

“We still need that backup,” Dedina said. “There are six canyons in the valley … and they are totally underserved for storm water, sediment and trash capture. [Videgaray is] only talking about sewage. He’s not even talking about trash.”

For complete article you can visit Times of San Diego at: https://timesofsandiego.com/politics/2018/03/23/in-a-first-mexican-foreign-minister-vows-fixes-to-ti...
###
Today